In July 2018, Brutus of Troy, the subject of my book Brutus of Troy, and the quest for the ancestry of the British, received a healthy dose of public recognition he has been rather missing over the last 400 years when his head appeared on passports issued by the City State of Totnes.

Totnes in Devon is home to the Brutus Stone, onto which Brutus is said to have stepped when he arrived in Britain, after his epic journey there from the eastern Mediterranean. The town’s connection with the Brutus myth goes back to Geoffrey of Monmouth’s History of the Kings of Britain, written in about 1135; though not mentioning the Brutus Stone, Geoffrey wrote that Brutus and his Trojan followers landed ‘on the coast of Totnes’, and from that further stories grew up.

Brutus was widely recognised in the Middle Ages as the founding hero of Britain, but in the Stuart era, scepticism about the truth of his myth led to his replacement with a female figure-head for Britain, Britannia. His myth gradually fell into obscurity, but Totnes has always remained proud of its Brutus Stone and its connection to such a wonderful and venerable story, that linked Britain’s history back to the glories of Troy and the mythology of Greece. 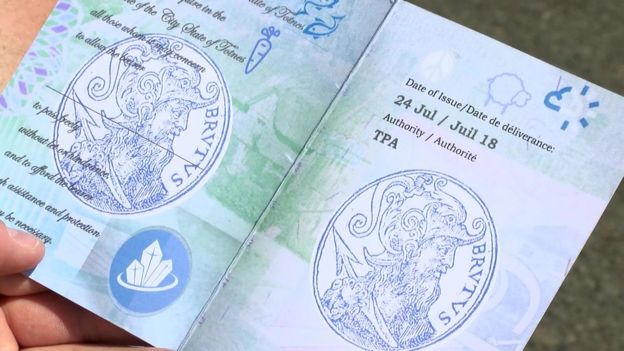 His choice as a figure-head for the City State of Totnes was therefore obvious; Britannia has had her share of glory, appearing for many years, for instance, on our 50p pieces. Now it’s time for her to move over, in Totnes at least, as Brutus reclaims his glory.

The ‘City State of Totnes’, with its attendant passports, was declared in July 2018 in a campaign led by local barrister Jonathan Cooper, to highlight his, and the majority of Totnessians’ desire to remain in the European Union. The campaign does not intend Totnes to break away from Britain really, but simply hopes that their desire, and that of many others like them, not to be dragged out of the European Union,  will be heard. The town’s mayor, Westacott, who I gather is not a direct supporter of this unexpected independence movement, commented on the BBC website ‘”People are always curious to see the quirky character of our town and if it brings in more people I am all for it”.

Totnes’s declaration of independence and support for remaining in the European Union was reported enthusiastically in The Independent on 29 July 2018, and reported Mr Cooper saying ‘Brutus… was the [great] grandson of Aeneas, the Trojan hero forced to flee when his city fell to the perfidious Greeks: “The parallels between the Trojan horse and that Brexit battlebus [promising £350m a week for the NHS] should be obvious.” ‘. The report continued:

Brutus and his followers slew the giants, including their leader Gogmagog. And on this now happy shore they created the second Troy that in due course became the nation named Britain, after Brutus.

“We are the inheritors of Troy,” insists Mr Cooper, “and the marvellous thing about the EU is that it adopted our Trojan values (defined in the Totnes Oath as “compassion, endeavour, ingenuity, altruism, diligence, daring and a peace-loving commitment to the dignity of all sentient beings”).”

But now, says Mr Cooper, Britain wishes to depart from Europe and its Trojan values, so to stay true to its roots, Totnes must remain in the EU by declaring its independence from the UK.

Many people who voted to leave the European Union were concerned about migrants, and wanted to keep Britain the way they liked to imagine it had always been, but throughout the Middle Ages and into the Tudor period, the Brutus myth was believed – that Britain’s original population was brought here by Brutus, and that they were the descendants of the survivors of Trojans, whom Brutus had rescued from slavery in north-western Greece and southern Albania. In other words, the British were the descendants of Middle Eastern and Eastern European refugees, and they couldn’t think of a prouder accolade. That is how our ancestors saw themselves.

But Brutus of Troy need not be a divisive figure, and indeed there are aspects of his story that should appeal to hardened Brexiteers too. According to Geoffrey of Monmouth, before Brutus reached Britain, he spent a few months pillaging the French.

As Brutus of Troy’s biographer, I sent Mr Cooper a message of support and he replied (29 July 2018) ‘We used your brilliant material as we researched Brutus. It’s an honour to have your backing’.